Another 14 down!! Probably was in a good shape, as it didn't take as much toll as these songs usually do.

Failed GM14 miserably on previous attempts, so must've been my lucky day today for it to go so relatively easy, haha.

Any suggestions on the next 14 to tackle? GT seemed plausible, as it doesn't have 16th streams; only bursts which are half-assable without failing immediately, hehe. No breaks either though - might not have the stamina for it.

Anyhow; this pack's great! Awesome job on the charts made and yet to come. Keep 'em comming!

Updated the leaderboard again. Also, here's a screencap from yesterday with Dirk (Ranfox) on the right and me on the left. 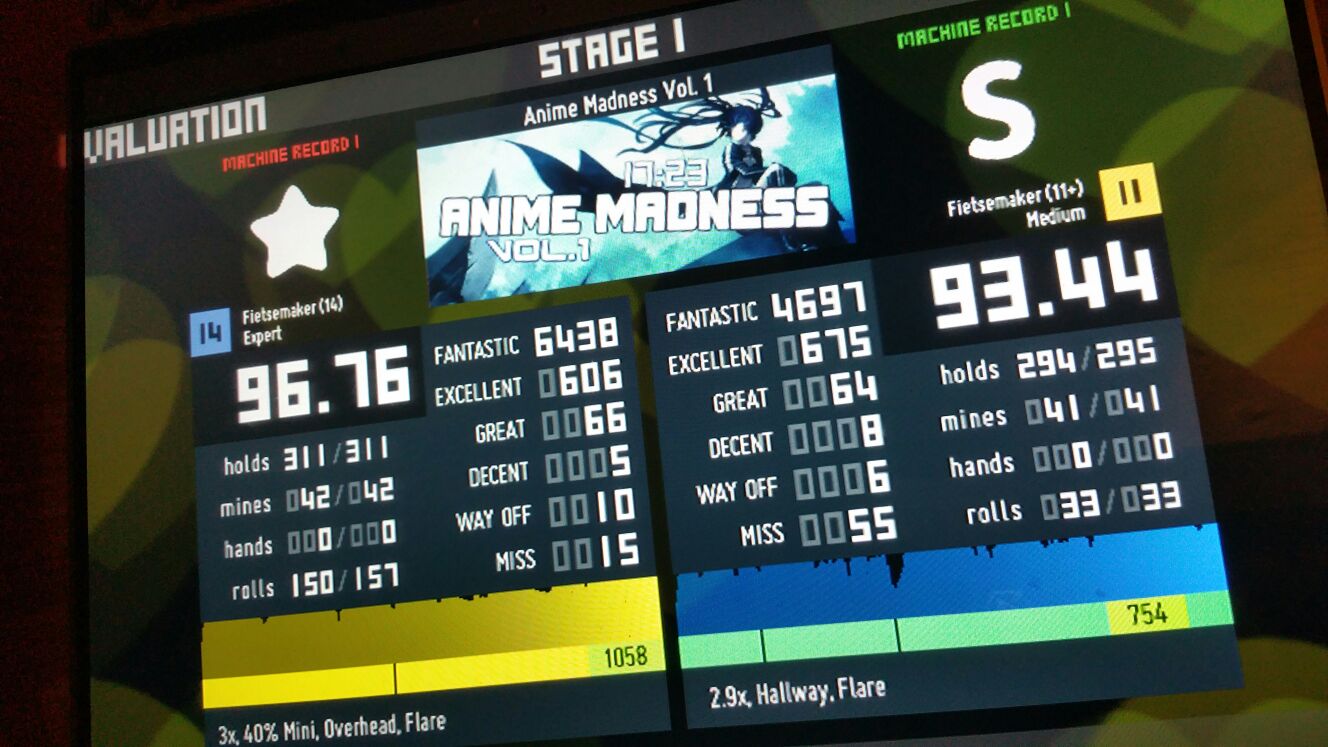 First time playing on our cab since it's gotten a software upgrade. Both timing and life are now ITG official, making both slightly more difficult than what we had before. But that didn't stop me.

Congrats on passing Goretrance. I think Anime Madness and Speed Disco are about as difficult, so you should have a fair chance at passing either.

On the other hand, if you want to try something completely different you can take a shot at Oceanlab and go for that sweet 512 measure stream.
0 x

After having endured this while failing the 14 that same day, I realize how beastly Jerros really has become hahaha

Really really content with this run though, felt very rewarding to finish it

completely no-bar too save for 30~40 seconds where I lost the rhythm for a moment and risked depleting my life. 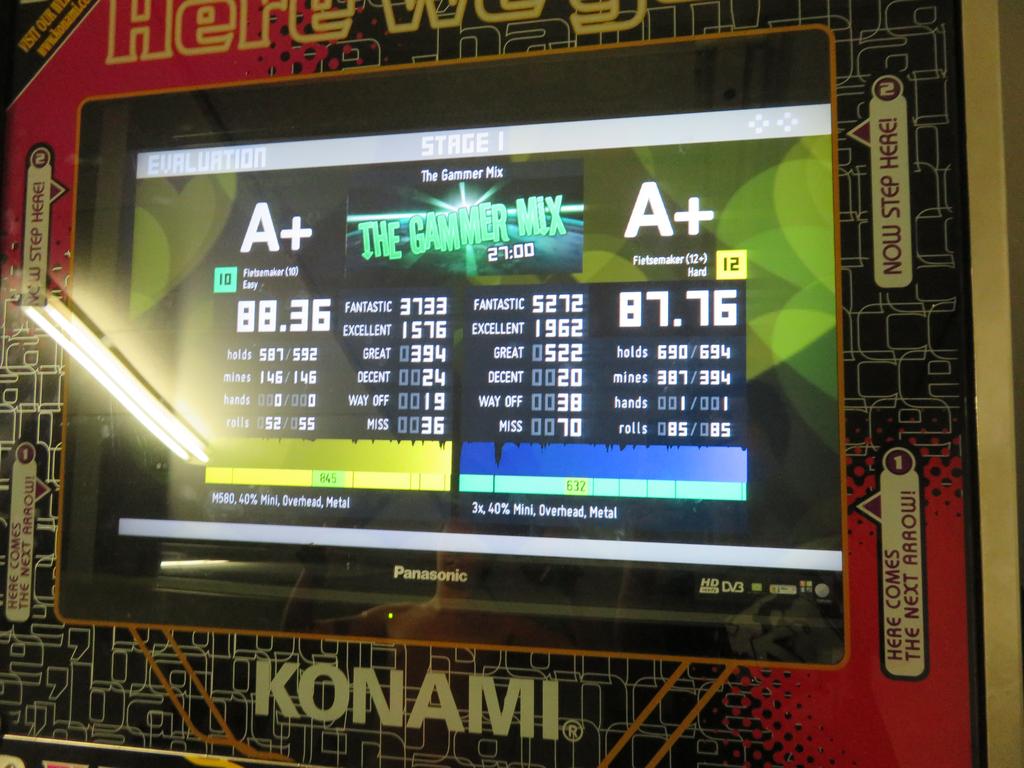 Kirituin on the left, me on the right
1 x
Events I'm attending/planning involving dancing games, feel free to join!

Thumbsy wrote:After having endured this while failing the 14 that same day, I realize how beastly Jerros really has become hahaha

Yeah, Jerros has really distinguished himself as a hardcore stamina player.
0 x Thumbsy wrote:After having endured this while failing the 14 that same day, I realize how beastly Jerros really has become hahaha

Yeah, Jerros has really distinguished himself as a hardcore stamina player.

Though I don't see myself as a stamina player; I simply get stimulated to give my all when there's a "bet you can't play this on xx-difficulty" element like this leader-board. Whether it be stamina or regular play, if I get challenged it motivates me to practice.

A similar leader-board with a pack of 12+ difficulty songs would get me tryharding as well, haha.

Meanwhile, Benjaboyy and I did another one; Jerros left, Benjaboyy right (he posted his nice score in the previous post as well).

Quite a while ago (half september) I played the DLC Initial D song. I just forgot to post it up to the point that NekoMythos worried about me not doing anymore Really Long Stuff. 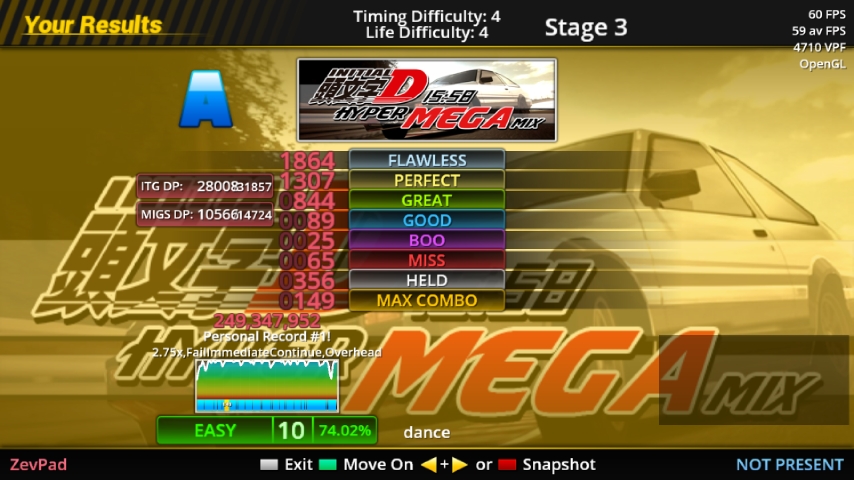 Yesterday I had the odd afternoon off, so I decided to plug in my pad again. Finished the last song of the original pack: 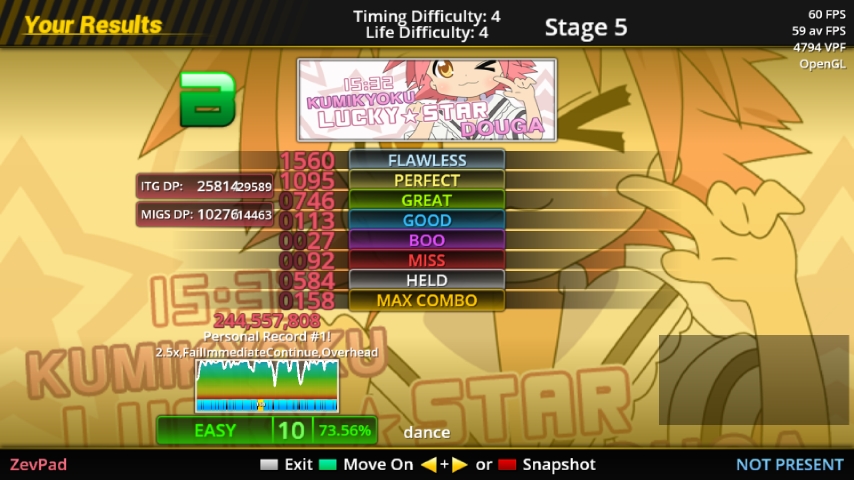 Also did a brave attempt at beating Sharpnel Megamix on 11, but had to give in at the 15 minute mark.
0 x

Really small part of it got filmed apparently, lol: